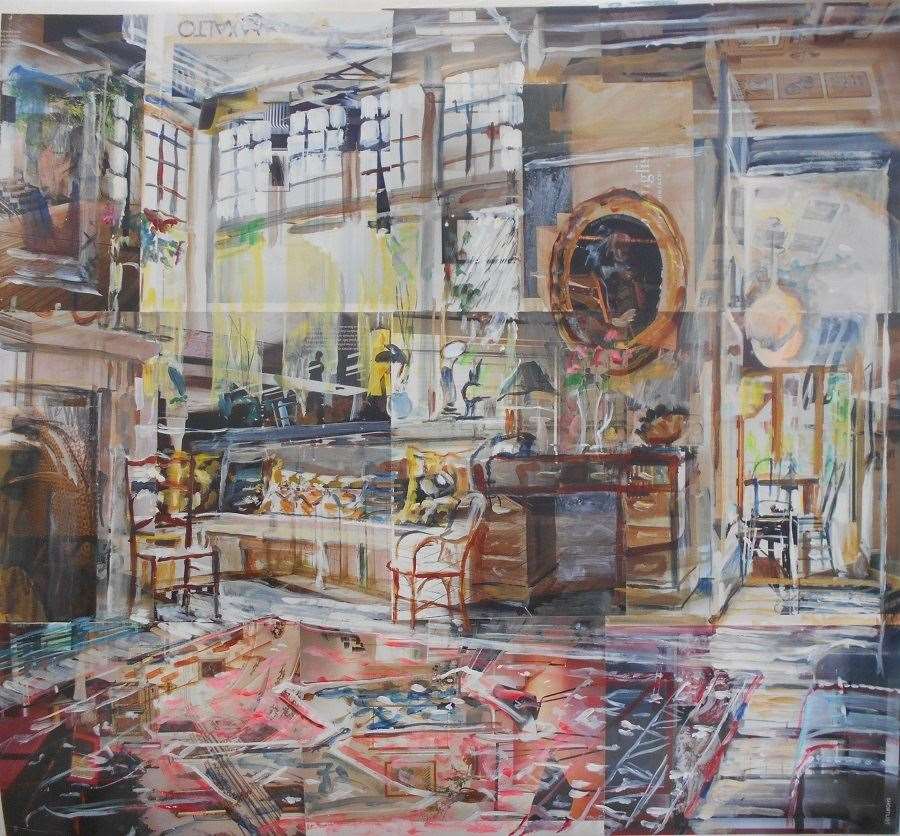 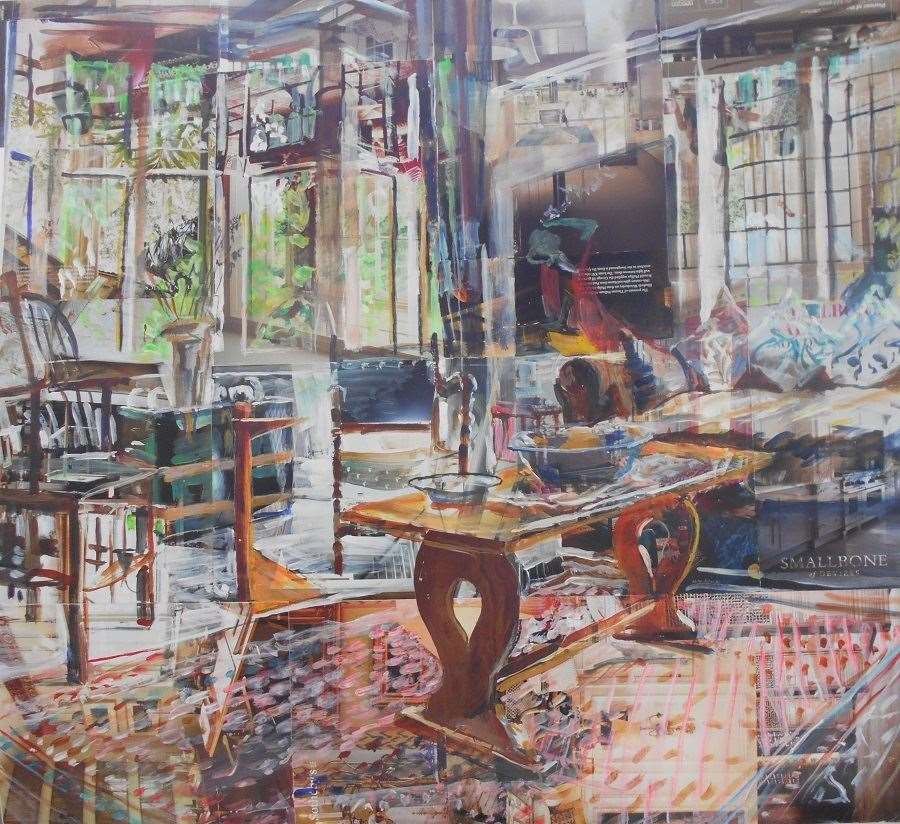 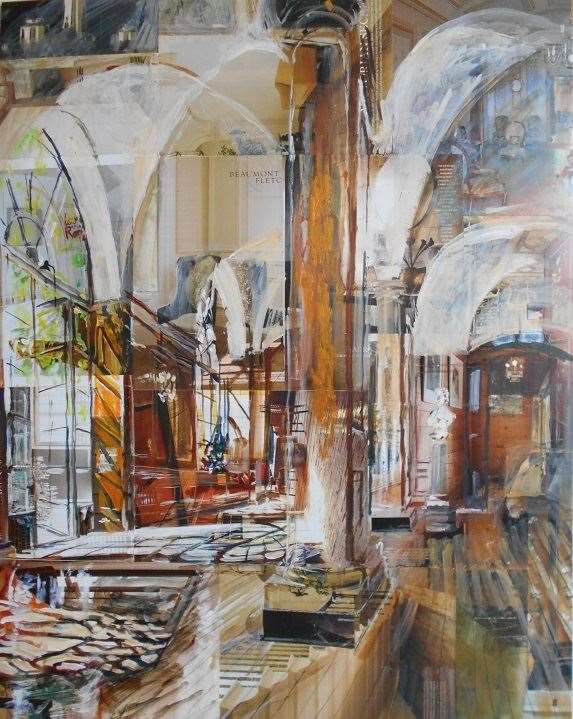 “I’m interested in what our living spaces say about ourselves. They are like a ‘portrait’ of who we are - or who we want to project to the world.

I’ve been told my paintings of interiors can make people want to cocoon themselves in a similar interior. There is always the idea of ‘home’; a place where we feel safe, can be ourselves...

I love beautiful rooms, like the Robert Adam interiors at Osterley or the grand at Merchant Taylors’ Company in the City or Royal Hospital Chelsea, but the domestic interior where someone has taken care to make it their own is always appealing. Interesting people make interesting interiors.

My father trained in Architecture and sometimes asked me to ‘colour in’ his plans, so manmade spaces were a natural interest. Going to art college, I was always interested in atmosphere and then further along a ‘sense of place’. Interiors, when I left the Royal College when I was 25, seemed a natural fit.

I was always and am increasingly interested in painting different sorts of light and how it can transform a room and how we feel about being in it. I think light is much more interesting in an interior than an exterior because as well as summer or winter light creating different atmospheres, it can also play with the objects or surfaces in the room, like wooden floors becoming enlivened and ‘fiery’ by light crossing them - let alone how interesting shadows can make dynamic patterns.

I have Natasha, a lady who I went to once a week for art classes after school from the age of 7-13, to thank for introducing me to collage. Going to the Royal College of Art, I wanted to make the most of my time there so knew I had to specialise in something - illustrators get more work if they have one style. I knew I had an affinity with collage and its many possibilities.

Both my dissertations at college, I realise now, were researching the reality - or not - in photographs and my paintings on magazine pages now are furthering that idea: the ‘real’ photo underneath and my ‘interference’ and ‘overlay’ of paint subverting the magazine page.

I love the spaces in the magazines being changed into my new painting. You can suddenly see a photo of a chateau larder cupboard filled with French rustic ceramics in a part of my painting of a London terraced house sitting room that depicts a plain wall. I enjoy the surreal happenchance.

Being commissioned by Royal Mail to do stamps was such an opportunity and painting at Buckingham Palace for the Queen was amazing, but it has been the commissions where I haven’t found the interior beautiful that are actually the most memorable; where I have had to find a beauty or interest that isn’t there initially. Good things come from being out of your comfort zone.” 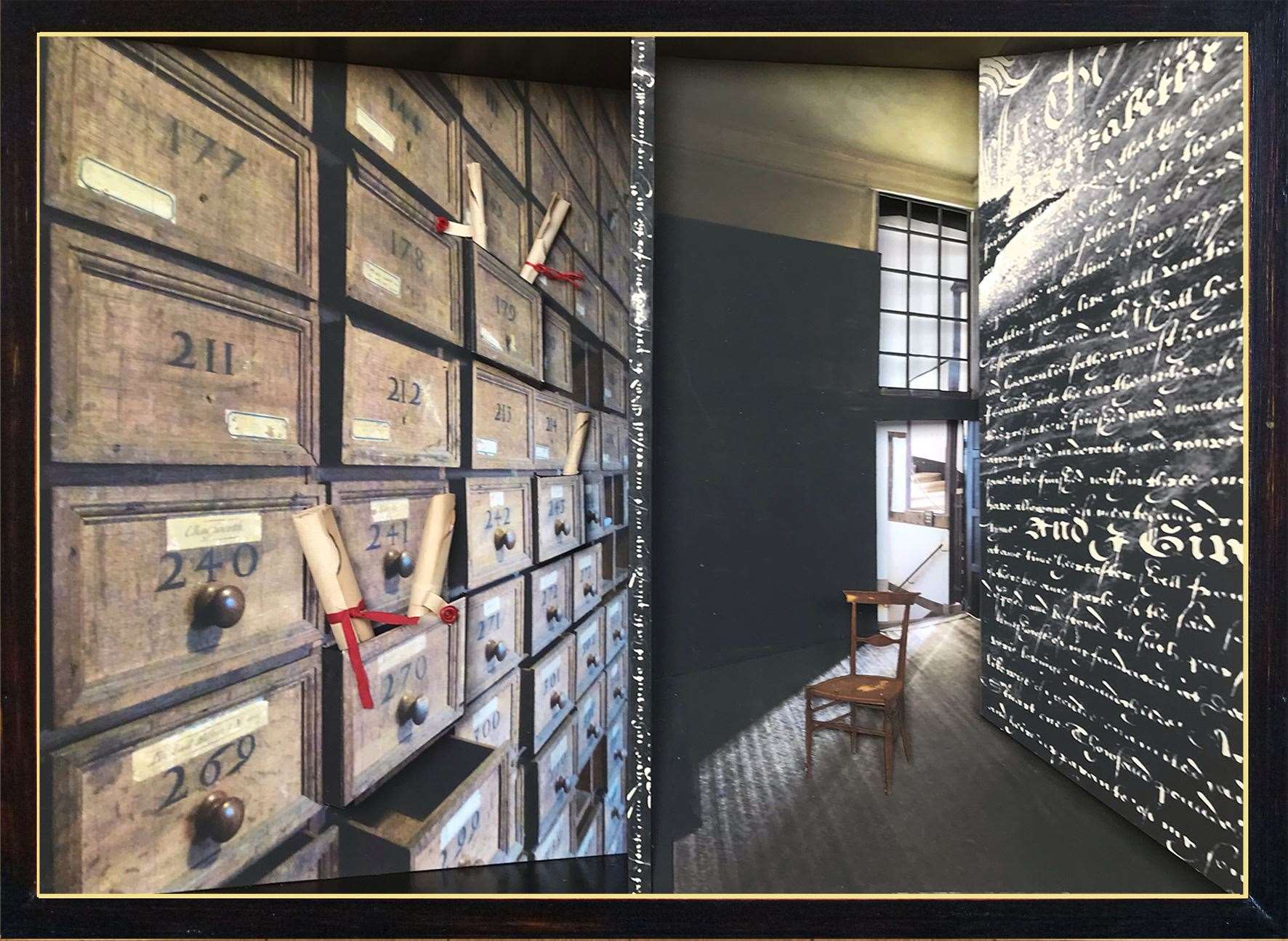 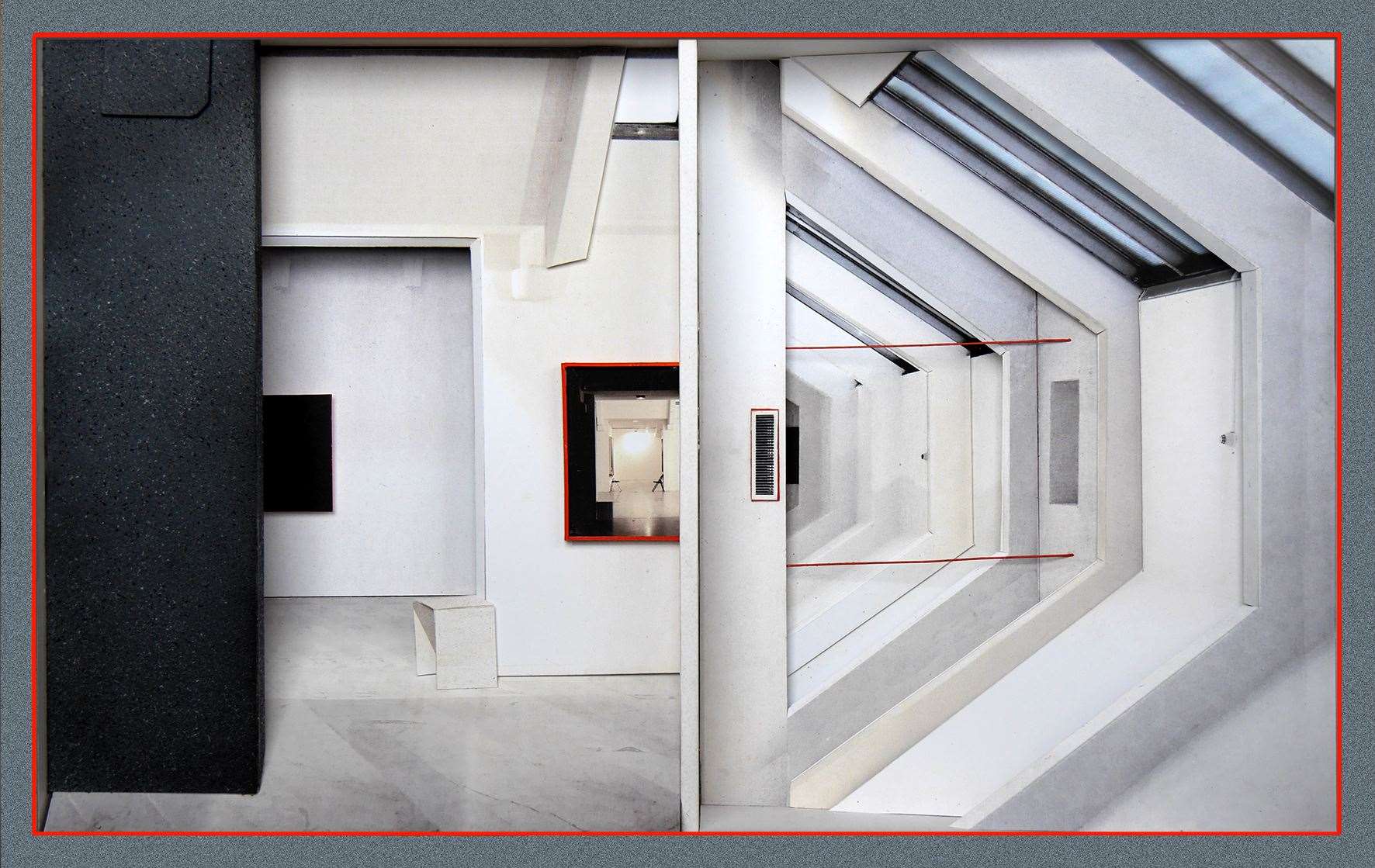 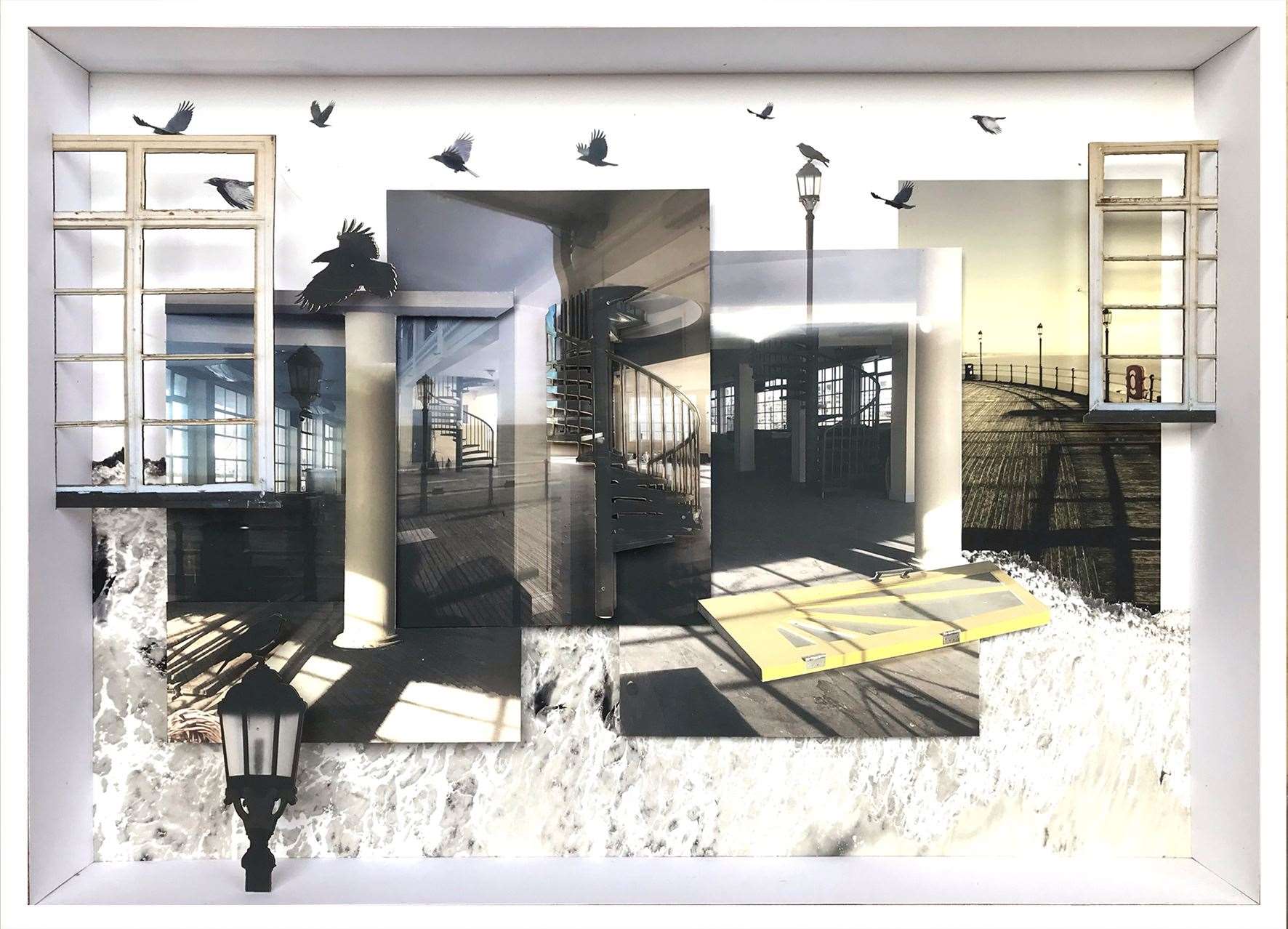 “This quote by Paul Auster from Man in the Dark (2008) clearly expresses the main concerns of my work: ‘There’s no single reality...there are many realities. There’s no single world. There are many worlds, and they all run parallel to one another, worlds and anti-worlds, worlds and shadow-worlds, and each world is dreamed or imagined or written by someone in another world. Each world is the creation of a mind.’

When I was a child I often used to stay with my grandmother who was very involved in the theatre and used to make costumes and models of stage sets for performances. I used to help her and was always particularly fascinated by the stage sets. When I started to develop my ideas in 3D I initially made them very crudely and photographed them with a variety of lights to make them really theatrical to emphasise their temporary nature.

We are always conscious in the theatre that the stage set is a construction so its form immediately questions reality. I was particularly interested in how a stage set can deceive the eye by playing with perspective so that spaces appear bigger or longer than they actually are through various tricks. In some new pieces for this show - Theatre of Lost Dreams Acts 1 & 2 - I was interested in how in these particular buildings the inside and outside become confused and I used images hanging like stage flats to emphasise my ‘constructed’ vision.

I started making 3D pieces around a line from a poem that someone wrote for me, titled "Other Lives..the ones we did not live". It always suggested to me a contrast between the place we are in and what we desire. This developed into an interest in what we present as our reality and what might really be happening beneath the surface.

This can be most clearly understood in the Dialogue Domestique series. We are bombarded with ideas of the 'perfect home', but in reality the home is also the setting for emotional and often disturbing scenarios. These pieces look at the split between the order that is presented and the chaos that may lurk inside. I explore these tensions in different ways throughout my work.

Inspiration comes from an eclectic range of sources: city backstreets, industrial ruins, geometry and wiring diagrams, detritus from the sea shore, unusual found objects and various texts including writing from R.D.Laing and Italo Calvino. It is hard to explain what draws you to something; I have a fascination for both ruins and conversely clean brutalist forms.

I love wandering around with my camera in new places with no particular agenda and just being surprised by things. Shadows and reflections play a large part in my work as this will often transform something very mundane into something quite magical.

During this strange year we have all lived through, I have not been able to go wandering so have been forced to develop ideas from photographs taken in my own house. In some ways this has been hugely challenging as I am so over-familiar with my own environment it took me a while to surprise myself! I have called the series The Great Indoors.” “Everyday objects are so inspiring to me. One example would be the feather - I saw one on the beach one day, picked it up and started to wonder about its journey: Where has it been? Where would the wind take it? Where would the sea take it? If it were a sail on a ship, could it take me with it?

It just kind of evolves and then back in the studio I strive to recreate these feelings and thoughts I have into paintings. Sometimes it can be the other way around and I have an idea which I then need to find the objects for.

I started drawing at a very young age and all I really knew was that a good drawing should be very realistic. I would stay in the art department at break times and during lunch, constantly drawing and painting, striving for realism. It was not until I really started studying in Art School that I started to express myself and my work became very abstract and three dimensional.

I returned to studying photorealism on leaving art school and the expressive side of my work is now the process - sketches from memory, paper cut-outs which I then set in scenes, photograph, then paint realistically; I even paint all the pencil lines. It's bringing these two contrasting aspects together which fascinates me and it is always evolving.

This is my first time showing with Byard Art and I am very excited to be working with the great gallery and staff. Considering recent events I couldn't pick out one piece to go and see, just get out to the gallery and see everything! Quick!”