Wet Wet Wet without Marti Pellow. Unthinkable, isn't it? Well, no, actually as former Liberty X man Kevin Simm has been fronting the legendary Scottish outfit for two years now and has been doing rather a good job of it. Bassist and founder member Graeme Clark talks to Adrian Peel about the band's new album

When Marti Pellow walked away from Wet Wet Wet in 2017, the other members of the much-loved quartet - bassist Graeme Clark, keyboard player Neil Mitchell and drummer Tommy Cunningham - were unsure what would happen next.

Hoping to continue their 30-year-plus musical odyssey, the trio - joined on stage and in the studio by unofficial fifth member, guitarist Graeme Duffin - auditioned a number of new singers, before deciding on ex-Liberty X vocalist and winner of The Voice UK in 2016, Kevin Simm.

The Wets, still probably best known, of course, for their 1994 smash Love Is All Around, from the soundtrack to the film Four Weddings and a Funeral, embarked on their first tour with Kevin in 2019 and now a new album - The Journey - is set to be released in June 2021.

Like many people, Wet Wet Wet have spent a great deal of 2020 at home. "We're just trying to finish off the album - that's the main priority at this point in time," says Graeme Clark, instantly recognisable as the only long-haired member of the band.

"We're just writing and trying to be as collaborative as Covid allows us - which is very difficult, truth be told, but this is where we all are, I think."

Graeme continues: "It shows that a lot of the way that we work we take for granted... When the four of us are there [in the studio] communication is key, and when we have to open up new channels of communication - things like Zoom and FaceTime and all that - there's always the problem of the split-second delay, so you can't really play together.

"It just means it's much more time consuming than it would normally be - and let's face it, we were never the quickest at the best of times in the studio. So this has kind of compounded that. But nonetheless, we've just had to work - and I think as musicians that's what we do, we're able to adapt in a way. 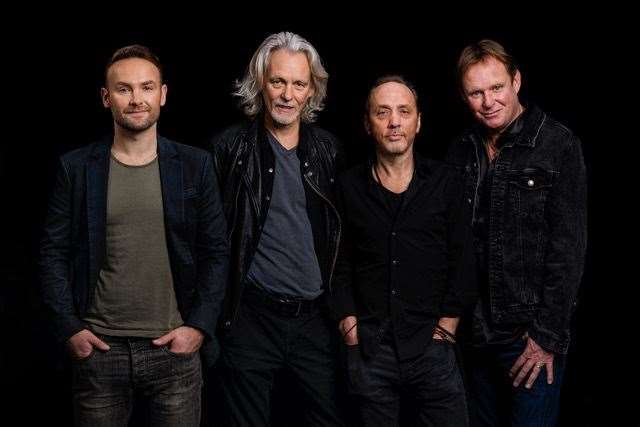 The Journey is the group's first album with Kevin Simm and their first since 2007's Timeless (the last to feature Marti Pellow). When Kevin was first announced as Wet Wet Wet's new singer, reaction on social media was mixed.

Graeme completely understands that some long-term fans may have been reluctant to accept the new lineup. However, a quick visit to YouTube assured one of these fans - me - that classic favourites such as Angel Eyes, Sweet Surrender and Sweet Little Mystery are in good hands.

"Yeah, for us it's great," enthuses Graeme. ""There was a lot of resistance, and I get that. People have seen this thing for 30 years and they can't move out of the way that they've compartmentalised that in their head - and that's okay, that's entirely up to them.

"But for us, it has to change - otherwise we're unemployed! We've been lucky; when you watch it, he [Kevin] slots in, he does the job and he's a fantastic singer."

Wet Wet Wet's new album, The Journey, will be released on June 25 2021. It can be pre-ordered here: wetwetwet.tmstor.es/

The band will be performing at The Apex Theatre in Bury St Edmunds on Thursday, November 4 2021.