Guilden Gate, a piece of sustainably-created paradise in Bassingbourn, combines a smallholding, glamping spot and a way of life. Lisa Millard meets the couple who made it home Verdant, fragrant and accompanied by a soundtrack of birdsong, Guilden Gate is breathtakingly beautiful. Easy on the eye and an exemplar of sustainable living, the smallholding is home to Jaq and Simon Saggers and their two children. On a sunny day you would not wish to be anywhere else, but it has not always been this piece of paradise.” When I looked at six acres of ploughed mud in 1998 I burst into tears,” says Jaq, whose favourite spot is sitting on her door-step with a mug of tea looking at the ever-changing meadow. “I never believed all those tiny tree and hedge ‘whips’ that we planted that cold winter could be a woodland, orchard and hedgerows. I am a town girl and the wonders of nature are like a miracle to me. Guilden Gate has become way more than I ever dreamt of.”

The farm, at Bassingbourn, near Royston, has been in the Saggers family since the 17th century changing over the years according to farming methods of the times. The couple bought the plot from Simon’s parents in 1998 – Simon grew up here and the place got under his skin. “During those formative years I developed a really deep sense of place about the farm,” he says. “Nevertheless, by the time I reached my mid-teens I spent most of my time restlessly trying to cut my anchor chains.” But eventually the land called him home – and I can see why. Guilden Gateis is now at its peak of lush summer glory. Native hedges weaving blackthorn and hawthorn are fullsome and provide habitat for the wildlife needed to keep the organic vegetable beds pest free. “I didn’t think the idea would actually work but all the birds nesting in the hedgerows really does keep the slug and snail population down. Until about 15 years ago at twilight we would be practically tripping over hedgehogs here, but now we hardly see any no matter how hard we try to encourage them,” explains Jaq. The vegetable beds are housed in a series of hedge-lined natural rooms, each named after their two children Maddie and George and elegantly separated by an archway entrance. The smallholding is built to operate as self-sufficiently and holistically as possible and there is much clever thinking behind the eco-system, which Jaq credits to Simon’s vision and John Seymour’s The Complete Book of Self-Sufficiency. Reed beds, a flow form pond and a willow trench treat grey water, a water recycling system and compost toilet reduce water use, a wind turbine creates enough electricity for the family to sell some back to the National Grid, wood from the woodland heats the house which is built from recycled and recyclable materials and positioned to capture solar energy via panels and south facing windows, a wild meadow provides flowers to keep the bees from four hives happy and productive enough to produce Guilden Gate honey and orchards bear apples, pears, plums, medlars, quince and cherries.

“We planted every single tree, thousands of them. It just went on and on,” says Jaq of the now established coppice on the five-acre plot. “I could quite often be found here having a sneaky little lie down until Simon stumbled across me.”

Jaq and Simon work the land and combine the smallholding with a jigsaw of income from various sources (veggie boxes are usually part of the mix but on hold this year as Simon is working on rebuilding two barns), including two glamping sites – The Coppice Woodland and The Secret Garden. A VW camper van is parked alongside a wood-fired hot tub and al fresco solar shower, compost toilet, fire pit, meditation and games area, all nestled in its own leafy glade ready for some seriously stylish but environmentally-light glamping. The Secret Garden site has a hand-built Hobbit House with living sedum roof, and both spots are a good distance away so each site has tucked-away privacy. The Covid-19 pandemic forced closure for this season but Guilden Gate opened its books on 4 July and the business is booming. A new event area/outdoor yoga space is now complete and yoga retreats and the occasional pop-up restaurant evenings (when meeting up is possible again) are now on the horizon. 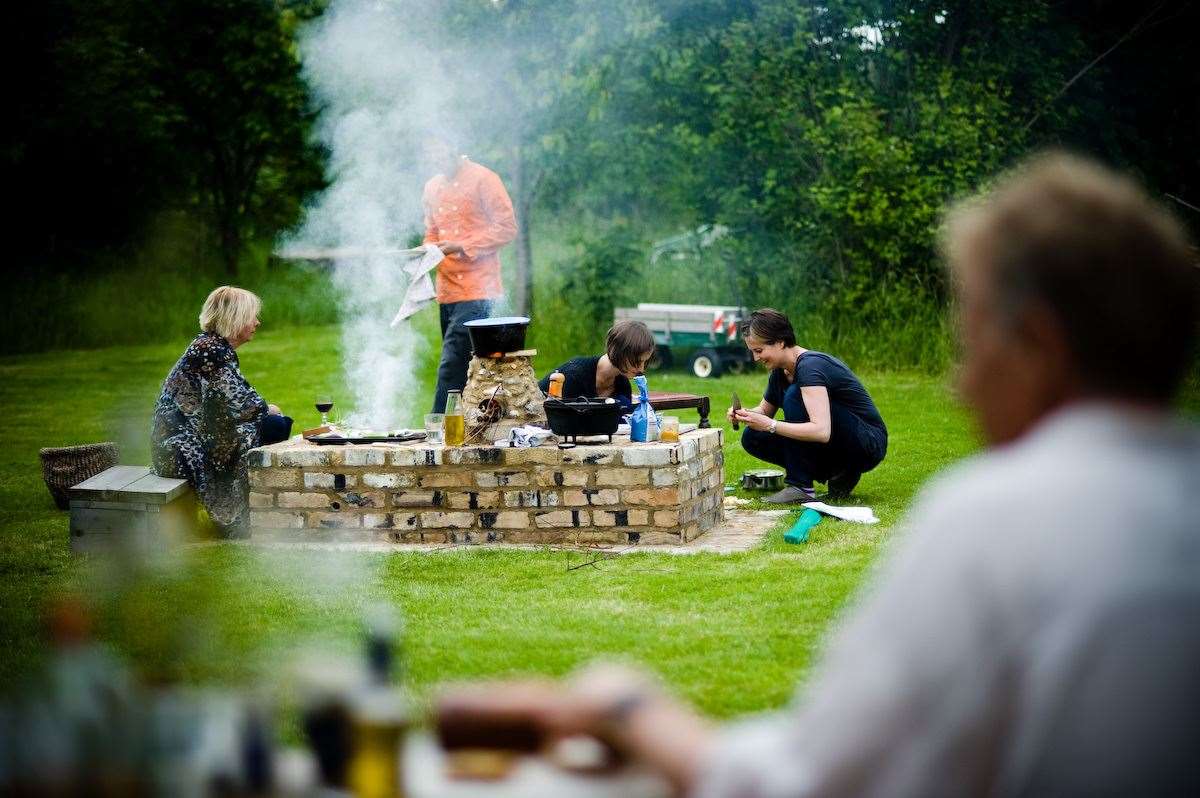 “Initially when we realised we would have to close our glamping sites it was a very stressful time with several sleepless nights. The Glamping is our main income stream,” says Jaq. “Then the government announced that small businesses would receive a grant and we were able to relax a little and be thankful that we were locked down in such a very beautiful space which, due to the lack of cars and planes, was even more abundant with wildlife.” Mindful of the urgent need to reduce carbon emissions and live lightly on the planet, Simon and Jaq have created a model smallholding that is testament to their personal politics, hard physical work, early mornings and muddy boots. “I look out of my windows and I see nature through the seasons, a harmony of plants and animals doing their thing,” says Jaq. “I feel so very proud that we have helped to enable this.”