WanderSups: Who needs a holiday? Have some bobo Shrimp bobo hails from the Bahian state of Brazil, north of the more well known cities of Rio De Janeiro and São Paulo, a creamy fish stew, sometimes likened to a bouillabaisse and nearly identical to the West African dish Ipete. The Bahia region is known for its Afro Brazilian characteristics - a warm, vibrant culture, steeped in history both painful and joyous; and rich in food, music and colour.

During a trip to Brazil that took in many Lapa street parties, many caipirinhas on the beach and all the other fun decadence that the country throws at you, I was in need of respite. I hopped on a boat, hangover in hand and headed for Ilha Grande - an island just off the coast of Rio De Janeiro that can only be described as paradise.

Planning to be there for a long weekend, we ended up staying for three weeks. Whilst my friend hiked trails, went surfing, got up for early morning jogs to reset her soul after our Rio experience, I chose the more sensible option and worked my way through every single white sand beach, complete with Caiprinha - I wasn’t that broken. And with every white sand beach, some of the best seafood I’ve ever eaten.

Brazil is often synonymous with churrascaria (Brazilian barbecue) and rightly so; I am yet to taste a cow as good as that of South American soil. But party after party, feasts of feijoada and skewers of prime beef, lunches of rices and beans (I could only afford one protein-heavy meal a day), I needed fish. I needed something light and nourishing, something I would be confident would allow me to get back in the 30C heat without fear of sinking during my hourly cooling off dip.

And so it was, on one afternoon, wandering through the streets* of the island, hunting for my next catch, I was beckoned to sit down at a wooden-fronted restaurant. Taking my seat on the customary plastic chair, complete with plastic table, feet in the sand, I explained to the waiter my plight. I needed something light, no meat, no beans - something from the sea. What would he suggest?

He spoke to me about this wonderful dish that hails from his native region; the name alone made me laugh - Bobo - which to this day I can’t say without a cartoon voice. Plump prawns fresh from the sea in a creamy sauce made from coconuts and cassava from the island - I was in. Bring me the shrimp! And so it came, served in a huge coconut shell, with a side of rice (not needed but consumed anyway - love a carb).

I have been trying to recreate this recipe for years, never quite landing it but after many, many, maaaaany attempts and a lot of research into some very specific ingredients I’ve bloody done it. This dish will transport you to a tropical island, trust. Ok you might be missing the sun and the sand but it is good. I promise you it’s good.

* Sandy paths flanked with beach bars, wooden huts serving catches of the day and oddly long stray dogs everywhere - apparently a very fertile sausage dog made the island his home and now all the strays have a certain length to them. 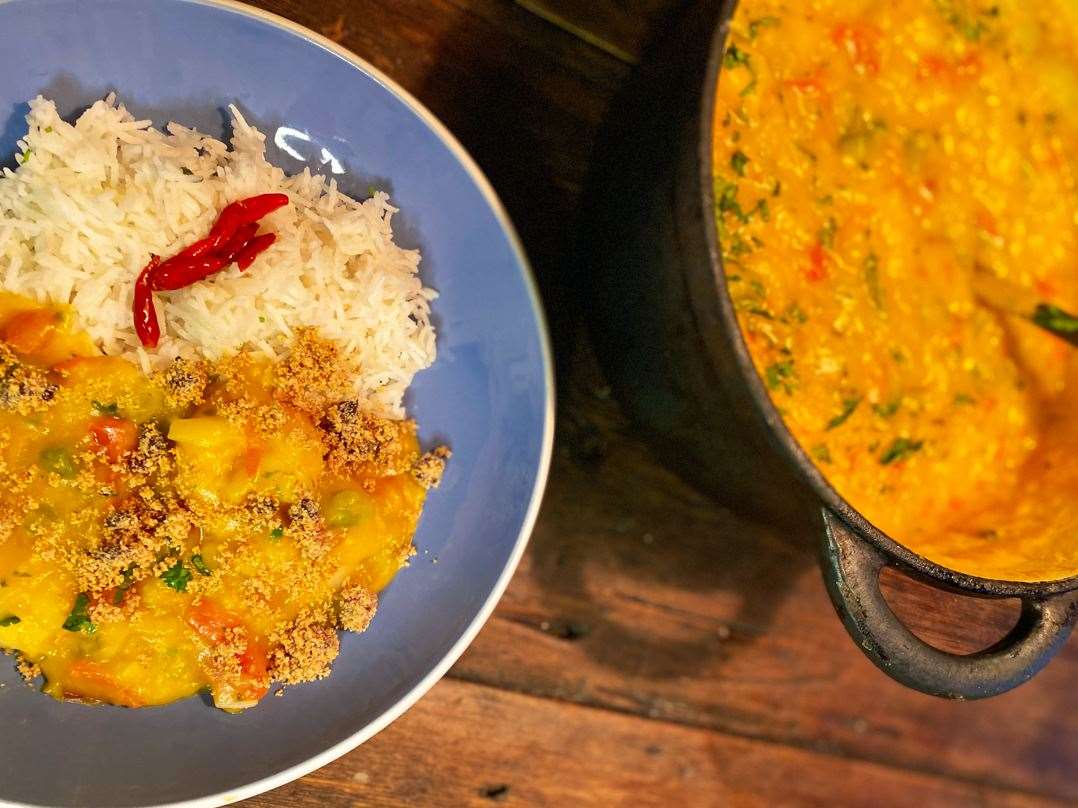 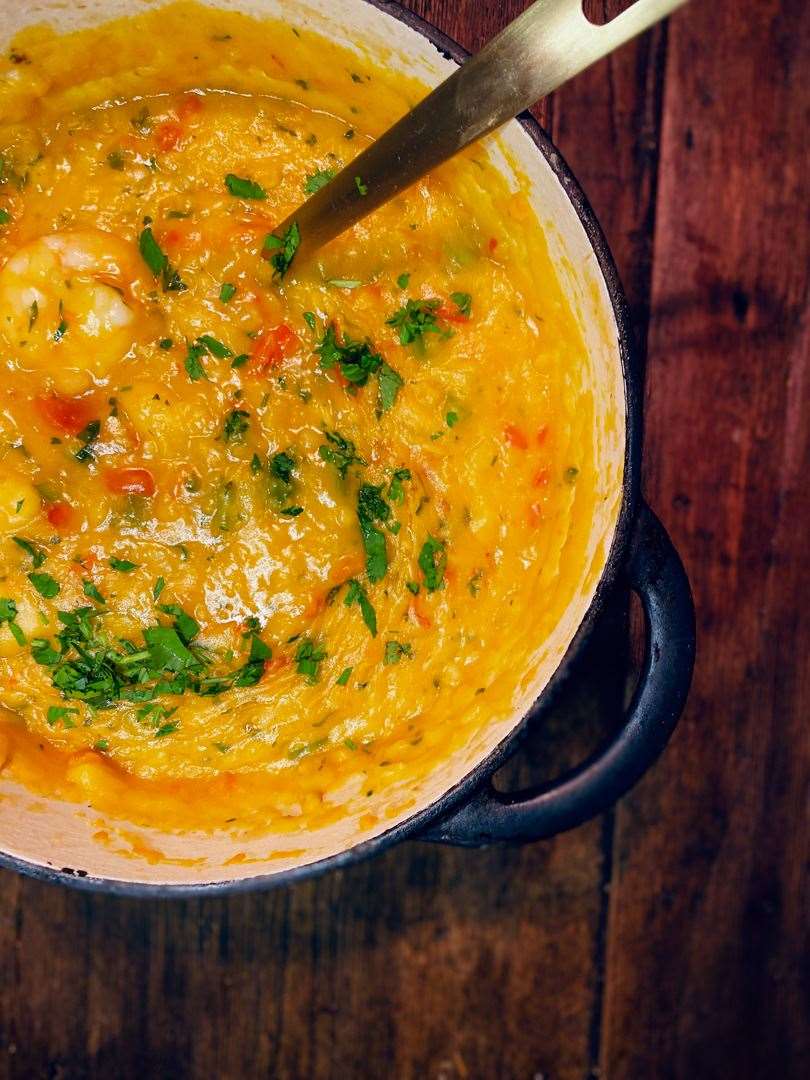 ● 500g cassava (you can also use yams or manioc root. These are available in most exotic food shops)

● 500g of the largest prawns you can find, shelled, from sustainable sources.

*Organic raw cold pressed red palm oil (dende oil) is a sustainably farmed oil from small producers in central America. It is not to be confused with the processed palm kernel oil that is responsible for mass deforestation. The health benefits of this product are huge and it is rapidly becoming as popular as coconut oil. You only need a tiny bit for this recipe but you can use it as you would any other cooking oil and reap the benefits.

1. Peel and chop the cassava, then boil in water till soft (as you would potatoes). When tender drain and mash.

2. Whilst the cassava is cooking, chop two of the onions and the green pepper. Deseed and chop 500g of the plum tomatoes.

3. Chop half the coriander.

4. Put the cassava, onions, pepper, tomatoes and coriander in a heavy based saucepan. When they start to sizzle, add in the olive oil and 500ml of coconut milk. Stir constantly for about 10 minutes until the mixture thickens and it starts to pull away from the base of the pan.

5. Take off the heat and set aside.

6. Chop the remaining onions and tomatoes and mince the garlic.

7. In a separate saucepan, heat a glug of oil and fry the garlic, onions and tomatoes until softened.

8. Throw in the prawns, remaining coriander and a large pinch of salt.

9. Keep stirring over a high heat until the prawns begin to take on some colour.

10. Add in the remaining coconut milk and stir continuously for five minutes.

11. Add the cassava mix and stir till combined, turn the heat down and allow to simmer for a further five minutes.

12. Just before taking off the heat, add in the dende oil and stir till combined and the bobo takes on a red colour.

Hannah reached the quarter finals of BBC MasterChef last year. She hosts WanderSups supper clubs serving meals created with love, inspired by journeys around the world, dished up on home turf. Her ethos is simple - have fun, enjoy it, make it an occasion. To find out more follow @WanderSups or visit wandersups.com