Food News: What to eat in and where to dine out

From the best sweet treats to order in to the coolest places to eat out, this list is is guaranteed to make you feel festive

Whether you want to treat someone else or yourself - ’tis the season of sugar and spice, after all - the festive limited editions from Bitesize Bakehouse are a shoo-in. Created by master cake baker, chocolatier and confectioner Jade Boswell in her South Cambs kitchen, there are two Christmas specials available to order: The S’mores Brownie ‘Yule Log’ Collection (£15 for four slices, £26 for eight) and The Marshmallow Snowflake Collection (£13 for eight pieces, £25 for 16).

Can’t decide which box to order? Speaking from experience, both boxes - delivered gift-wrapped, tagged and tree-ready by post - are equally delicious: order both.

For a fast, filling, flavourful and festive breakfast, The Great British Porridge Co’s new Winter Warmer is tough to beat. A limited edition, available through the winter months only, it stars fresh apple and spicy cinnamon with date giving a kick of sweetness. Like all the brand’s porridge mixes, it’s 100% natural, vegan-friendly, high in fibre, contains no added sugar and is ready in 60 seconds - simply add hot water or milk.

As anyone who’s tried to bake them from scratch will tell you - *raises hand* - French macarons are notoriously tricky to perfect. This Mon Dessert kit, compiled by patisserie pros, makes it far easier, though: containing all you need to make your own artful and flavour-filled Chocolate Noir & Gold Dust Macarons, which can easily be adapted for a plant-based diet, too, it also comes in a keep-forever tin and a proportion of sales goes to environmental food causes.

The holly on top of the pudding? Made from Fairfields’ own homegrown potatoes and hand cooked in its on-farm factory, too, the crisps are produced using solely renewable energy.

Available in 150g bags from branches of The East of England Co-op, the Christmas crisps can also be ordered by box, priced £18 for 24 x 40g bags, at fairfieldsfarmcrisps.co.uk

Already home to Dojima, based at nearby Fordham Abbey, Ely has just welcomed a second sake brewery - and it’s a sparkler. The Sparkling Sake Brewery is the first in the world to specialise in a sparkling variety of the iconic Japanese rice wine, with the purity of the local water, a core ingredient, said to be a big part of Ely’s appeal as European base for the brand.

Founder Naoki Toyota launched The Sparkling Sake Brewery in October with the release of its debut drink: awa, Japanese for ‘bubbles’. Like all the brewery’s products, which are handcrafted in small batches, it’s naturally sparkling: awa is, says the team, “a work of nature’s art which expresses the beautiful and delicate bubbly essence of natural fermentation”.

Want to pull out the stops for this year’s Christmas party? Elle-Events, the brand behind this summer’s sell-out pop-up series at Cambridge Cookery, has teamed up with city speakeasy 2648 to host one-of-a-kind Christmas events throughout December.

Every day and night of the week, people will be able to hire either the entire underground bar or The Secret Library for a bespoke festive event: whether you want to throw a murder mystery cocktail party or a buffet dinner with live DJ and dancing, Elle-Events will organise it all.

Menus will be in the hands of Shanty Kitchen’s Jason Howard. To give a flavour: canapes and finger food options include turkey terrine with pickled shallot and cranberry emulsion, wild mushroom tartlet with truffle cream, and Irish cream trifle cake.

For more information visit elle-eventsltd.co.uk and to book email info.elleeventsltd@gmail.com These dining igloos are giving us *all* the festive feels. Twinkling with fairy lights and candles, furnished with faux fur cushions and throws and fitted with individual heaters, they’re available to hire at two Cambscuisine properties - The Three Horseshoes at Madingley and The Cock at Hemingford Grey - from November 26 onwards. Each seating a maximum of six people for dining, hire is priced £40 per pod off-peak (Monday to Friday), and £50 peak (Saturday and Sunday). Cute, cosy, seriously Christmassy.

For more information and to book go to cambscuisine.co.uk. Overlooking a mill pond to Sheep’s Green, riverside Cambridge pub The Granta has always been blessed with one of the city’s prettiest views. Now, thanks to a floor-to-ceiling refurb, it’s got one of the prettiest interiors, too: designed to make the very most of the building’s period features, the decor deploys heritage paint colours, button-backed leather bench seating and a wood-topped, copper-trimmed bar to classic-yet-contemporary effect. The same is true of the new menu, which combines old-school pub classics like fish and chips and Charter pie with seasonal specials.

“The Granta is a fantastic hidden gem nestled on the River Cam,” says general manager Buckley Cypher. “This renovation has only added to the charm and style of our iconic pub. We’re thrilled to welcome guests back so they can dive into our new seasonal menu, as well as enjoy the revamped décor both inside and outside the pub.”

Part of the Metropolitan Pub Company, a collection of 60 “unique and premium pubs celebrated for maintaining their individual character and charm”, The Granta also has a revamped outdoor bar, kitchen and snug seating area. 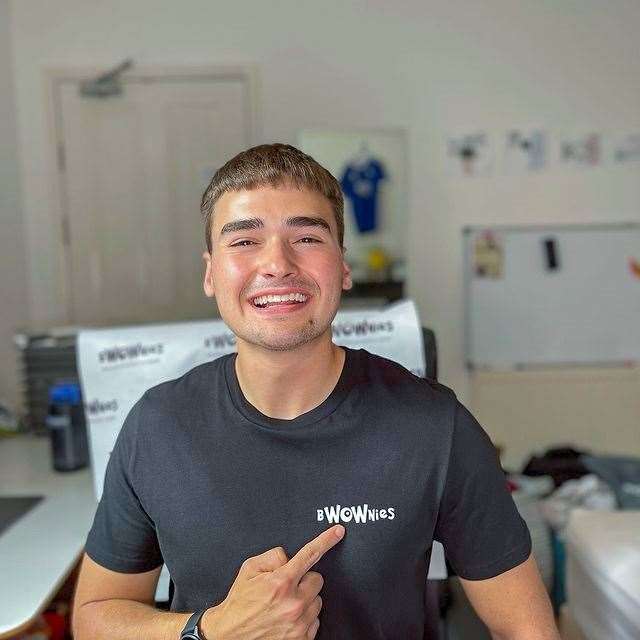 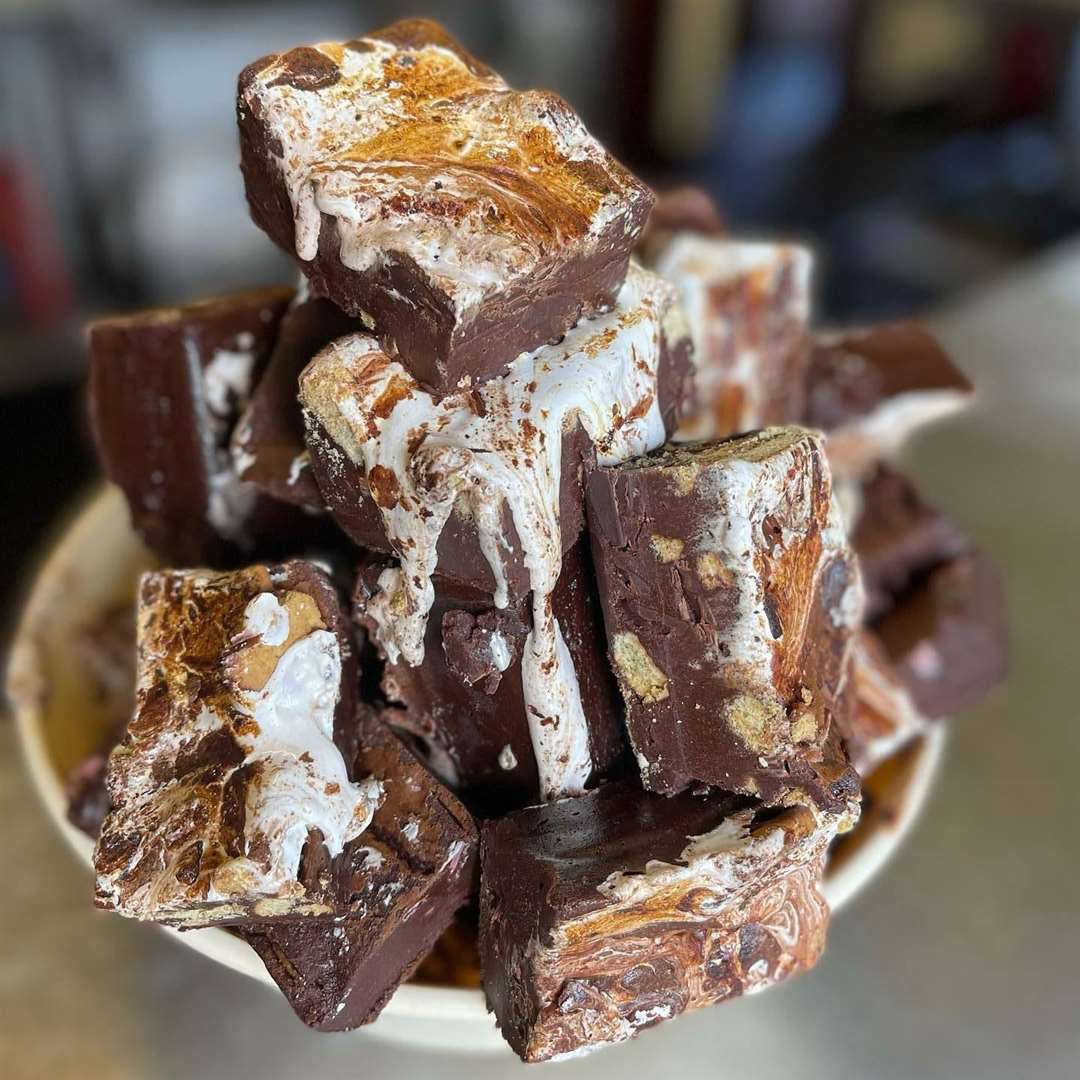 A uni student from Sudbury is putting the ‘wow’ in brownies - quite literally. Keelan Waldock, now 21, launched Bwownies while he was still in sixth form and last year’s lockdown saw it boom, expanding from his home kitchen into a unit near his university base in Exeter.

“I have always been passionate about food and love making food, but brownies was the one I could make that was so unique,” says Keelan.

It was his nan who encouraged him to turn his hobby into a business: “We were writing names down on my phone and the last one was Bwownies. I couldn't believe it hadn't been taken. Putting the 'wow' in the brownies just sums up the product.”

On graduation, Keelan plans to move the business, which sees him post brownie boxes across the country, back to Suffolk. With mainland UK delivery free, he offers both core flavours, such as vegan white choc chip, alongside seasonal specials, like a s’mores brownie for Bonfire Night and a ruby choc chip to mark Breast Cancer Awareness Month.

Keelan credits spreading the word via social media with boosting the business, along with his brownies’ “game-changing texture”: “I developed a recipe which created the most gooey and velvety brownie on the market. You will not be let down.”